Bruce Stewart died last week. He’d been crook for a while. He built Tapu Te Ranga Marae, by himself, which is a little ridiculous, like a one man community centre. How did this come about? As Bruce told the story, he was brought up in a Pakeha/Maori family, living a mainly Pakeha lifestyle. As a young bloke, Bruce got into trouble and a bit of fraud landed him in jail. While inside, he began to study Maori culture, reading an article or two, perhaps something by John Rangihau, and decided that if you were Maori, you should live communally, practise manaakitanga, aroha etc. Better do it then, he decided. It’s always trouble when people take things literally – Riverside Community was created by young Methodists who decided to put Christ’s teachings into practice.

Anyway, Bruce got some land with an old house on it in Island Bay, founded a work scheme which took on young gang members, got a source of car cases from Todd Motors, accessed demolition timber and built his first whare. Prime Minister, Robert Muldoon became an ally – Muldoon had an empathy with the gangs. Bruce and the boys built a second house, and kept building. He forgot to get permits but was an amazing builder. He didn’t need a plan, just an idea in his head. These whare remain extraordinary structures and have become heritage listed buildings.

All this was taking place in a suburban street and when he started a landfill project as well, to bring in some money, he became ‘a problem neighbour’, as trucks loaded with clean fill climbed the narrow and steep street. Bruce’s energy was astonishing and now he had a story to tell, illustrated by these buildings. People came and went (he wore them out) and children arrived. Hui started to be held at the marae, which was still an aberration – this one man outfit – but there was an energy impossible to ignore. Neighbours started to complain and the council noted the lack of permits and threatened to close it down. Mayor Michael Fowler became an ally and it survived.

Another house was built and another, the last one a women’s house (another innovation) painted by Robyn Kahukiwa. It’s the most beautiful whare of all. Strays and waifs turned up and received shelter, a kohanga reo was established, he wrote some stories and some plays and the Maori Writers and Artists held hui there. The Greenies got interested in his gardens and became allies. The stories grew and the story telling. He got on the wrong side of the bureaucrats occasionally and there would be talk of dodgy accounting, but he always survived. He lost land and then the Sisters of Compassion donated some.

The marae was well used by now, a convenient place for corporations and government departments to fulfil their treaty obligations. It was in the city and freer of protocol demands. Schoolkids loved the place and he enjoyed telling his stories to children and to people from overseas.

He played the Te Whiti character for me in Ngati Pakeha, performing on stage rather than in real life and we rehearsed at the marae. His Waikato whanau were involved and a little uncomfortable – it was, after all, a strange place culturally for the traditional person. At one stage, Bruce called together a marae committee, but we never got any information at meetings. Bruce was a one man band, a patriarch of the old sort, guided by his personal vision. 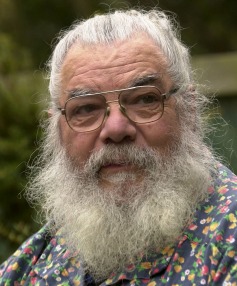 Eventually this became a flaw. As his body began to seize up from the hard physical labour, he was still incapable of handing over any control. The last time I was there, ten years ago, when I was doing the Rachel Corrie play at BATS, I stayed at Tapu Te Ranga and we rehearsed in the women’s whare. By then the marae was feeling a little empty and Bruce seemed a bit lonely and isolated. As I wandered around the grounds I could imagine a housing co-operative on the land down below; young Maori families wanting a house in an increasingly expensive city creating an eco village, a papakainga, with the marae as its centre; communal gardens – it could be amazing.

I wonder what will happen. At the moment the marae is closed because of earthquake and fire regulations. Meanwhile there is the story of the man who had a vision and built a marae of great beauty, overcoming all odds. His final struggle – getting the bureaucrats to let his whanau bury him on the marae. I hear today that he’s won that battle.