Funny week. Tired of the US: Trump, Clinton, cops shooting Afro-Americans, tired of the Empire and its influence and the space it takes up. As the Cuban ambassador said to me on Mayday, the States is politically mad but it has the largest military and its cultural influence is pervasive. And this is a nation that can’t even manage to get a health service together.

Writing this book on environmentalism and the Coast I sometimes gulp at the local malevolence historically: from kicking the Maori out of Mawhera, to the anti-Chinese nastiness, to the Buller red-neck stuff in the 1980s – demolishing peace activist Owen Wilke’s house, to the burning of the Buller Unemployed Workers Centre, to the saga of trying to mill the beech forest.

Then there’s the problem of associating these wider movements with specific people. Caroline had a knee replacement operation, along with a couple of men, so the recovery room was full of pain and humanity. The old bloke who lives alone with a generator for power, worried about his cats and his freezer full of meat. He’s had a bout of cancer but was phlegmatic about it. We’ve all got it, he said. It’s like rust. Sometimes things go rusty. Lovely bloke. Hard to reconcile with the history.

This morning I managed an early bike ride to Roa: misty, moist, warmish, the birds busy with nest building. A relief to pedal and listen to the whispering of the land. On the way back a couple of Maori girls were walking along the road in gumboots and pyjamas. Kia ora.

The new play comes up for performance in a couple of weeks. A nervous time, getting the bits and pieces in place. There are a couple of songs in it that are relevant to the above: When man first arrived on these shores/ A thousand years ago/He showed the need for patience/ For some things are very slow. The crossing of the alps takes time/Old men sit in the sun/Polishing pounamu takes time/ Beauty is only patiently won.

We’re trying to set a new culture for the Coast. Perhaps an arrogance, but the Zapatista have just held a cultural festival. They wrote in the programme: “If the machine imposes a perverse logic in which every tragedy numbs rather than enrages, perhaps it could be the Arts that remind humanity that people not only kill and destroy, impose and dominate, humiliate and doom to oblivion, but can also create, liberate, and remember.” 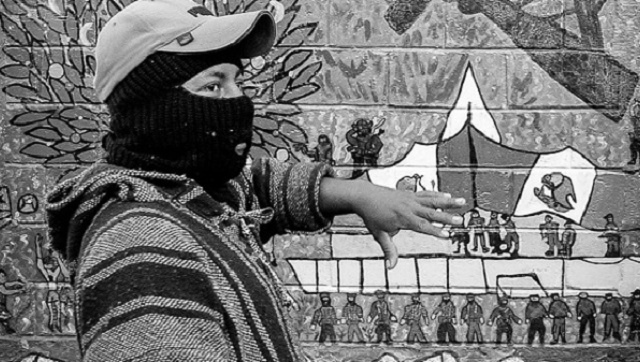 A Zapatista shows a mural depicting the movement. | Photo: teleSUR / Road to Resistance