Having heard a talk about e-publishing at a workshop, I thought I’d have a go at publishing a trio of novella manuscripts I’ve had sitting around for a while. It’s been a fascinating experience to enter the digital world as producer rather than consumer.

For a start the publishing programme, Smashwords is democratic; it’s free, there is no mediation (although they’d probably pick up porn), the only censorship is compliance with the processor that turns word into html, and this becomes largely a matter of getting rid of formatting. Simplicity is the key and initially that does seem a virtue, although there can be hidden corruptions one had no idea existed and these can torment. They’re not at the level of viruses but something more like allergies, to be got rid of by switching formats, word to notepad to open office back to word. It’s a little like switching governments. Time consuming as well. And if sales take place, the writer is paid a good percentage. A brave new people-to -people world, bypassing editors, publishers, censors, arts councils…

But then there is the question of marketing to the unknown global, English speaking consumer? The cover is everything one is told. Best to get a professional. And there are a list of people making a living designing book covers, not covers so much as images. Bright, simple and garish seems to be the requirement. Genre steps in and romance (soft porn) and crime are the sellers – go to the local library and see the same phenomenon. Suddenly democracy is very prescribed: Trump or Clinton, Stormy Daniels or the mafia and the underworld of desire and ambition. Key marketing tools are linked in, facebook, twitter, blogs, plus platforms I know nothing about. Suddenly it’s all very familiar: family, friends, neighbours, reviewers, libraries, a push here, a shove there, hope, and often a box of unsold books under the bed, or in the cloud.

It’s a milieu as dense as the Holy Roman Empire, accessible yet absolutely impenetrable except by luck, accident or misfortune. Above all, it’s a world without texture. There’s nothing to touch other than a keyboard. There are no pages to spill coffee on, or bend to mark a spot, nothing to put on a bookshelf to gather dust or to pack away when shifting house. There’s no deterioration, nothing for mice to nibble, no physical transaction like borrowing or lending a book, no physical market place. Everything remains untouched.

Of course great for aeroplanes and backpacks and cyclists, for those on the move and travelling light. And there’s immediacy. Gertrude Stein – remember? That’s right. Download all her work for a couple of dollars. I can have a reasonable library on my kindle or kobo or iPhone. It’s just this need for something to touch, to retreat from a world where actually everything is free but nothing has value. I find one of those old hardbacks with no image at all on the cover, just the title and author on the spline, open it, begin to enter the mystery of what these pages of words might be about… And even more extremely, the memory of the zamisdat method of publication in the old USSR where the reader laboriously made a further copy, often by hand, a labour of love and a gesture of freedom.

Ultimately I belong in the rehearsal room: real people, real floor, real walls, working toward a performance which will then disappear into the going home night of winter wind and summer rain.

The Moments in Time trilogy – an exploration of the way historic and personal conditions intertwine.

Peace and Goodness – 1861, Taranaki at war and the wreck of the mail ship on the Maori-held Coast, the arising of the prophet and the journey of a French nun.

Big End – 1962, coming of age in Palmerston North during the Cuban missile crisis. Adam is reconditioning the motor of his Ford 10 before heading off to university; his girlfriend, Sarah is off to RADA to study drama; Adam’s mother suffers from the nerves but has a visitation from God; his brother turns up with a Maori woman he intends to marry – as the ships head to Cuba… 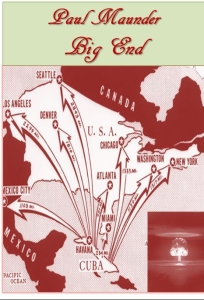 Out of here –  2018. Two of Greymouth’s precariat meet at the pub, realise they share an emptiness, fall in love, steal a boat from Iveagh Bay and head south for the remote bush, watched over by some of the lesser gods.

Find them wherever you find these things.

Big End, ebooks, Out of Here, Peace and Goodness