We hear the word ‘tragedy’ an awful lot, for it is used to describe most sudden traumatic deaths, from traffic accidents to mine explosions to house fires to tourist disasters such as the recent White Island event.

As a dramatist I can become irritated at the loose use of the word, which, for me, is most valuably associated with a form of drama ‘of elevated theme and diction with unhappy ending’ to quote the Oxford English Dictionary. Yet the OED gives a second meaning: ‘sad event, calamity, serious accident or crime.’ This then, is how the word is generally used and my irritation smacks of snobbery.

I’m faced with a choice: accept the endless, almost daily tragedies, or see if there’s some connection between the two definitions – can the theatre form which comes from the Graeco-Christian tradition, tell us something about the more general use of the word and vice versa?

According to Raymond Williams, who wrote a very good book on the subject, the drama tradition of tragedy began in the theatre of Ancient Greece when three masked characters separated out from the chorus in order to enact ‘the grievous stories of particular ruling families’ as they encountered the vicissitudes of fate and the judgements of the gods. The stories were both myth and a form of history. In the last century the story of the Kennedy family, for a period, had this quality. 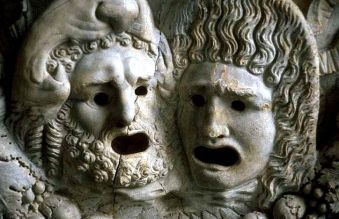 In the Medieval period the tragic story became more about an individual turning aside from contemplation of God and jumping onto the wheel of fortune and being struck down by ‘sin, misgovernance, pride and cruelty’. We have moved from the Kennedys to the Trumps.

Shakespeare explored the tension between the two spaces.

But with the arrival of the bourgeoisie, the tragic story, writes Williams, becomes more about an individual retaining dignity through a time of suffering caused by moral error, with redemption being possible if that moral error is corrected. Here we could use as an example, the Royal Family and the Diana episode, with a new kind of action, including the idea of poetic justice and the need to restore ethical order and unity after an individual is destroyed. We see the same structure of feeling when people overcome addiction.

With the late 19th  and 20th  centuries we find a tragic mode which is more opaque, for in this mode, suffering is rooted in the ‘nature’ of man. Suffering is, in fact, normal, evil is all powerful and fate is blind. Ordinary people can do each other the greatest injury because of the ‘cruel and indifferent but also immensely fertile law of nature and life.’ In this world view, nature is all powerful and civilisation is a lie. This is revealed in the turgid tales of the court page but also the horror of the death camps. Faced with this, resignation is the order of the day.

But we are also in the tragic realm of the climate crisis where dissolution and chaos is not an individual or even family fate but an event on a planetary scale with the above belief system leading to the tragic action (or inaction) of denial, with everything reduced to the accidents of blind fate and the only position to take being one of resignation.

In this situation a new tragic story has to be told in order to confront the ‘grievous disorder’ and to find resolution. Enter Greta Thunberg and the climate justice kids, who link the suffering of ordinary people in the developing world and of indigenous people everywhere, to the need for human agency(acknowledging what scientific knowledge is telling us and acting accordingly) and ethical renewal. 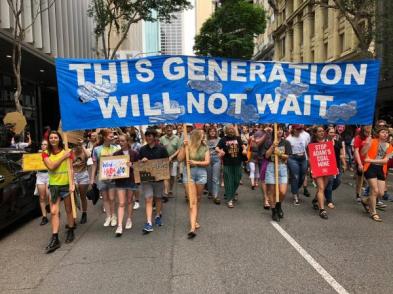 It It is the grandest of tragic tasks and one in which myth and history or myth as history, are key, which is why their small actions resonate so loudly. 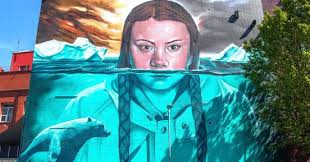