The day coincided with the book launch of West Coast Plays, plays I’ve written for the Kiwi/Possum Company over the last ten years and a book for which Carol Dawber has written a splendid introduction, putting the work in the context of other community theatre which has taken place on the Coast since its founding. I also snuck in the launch of a novella I’d recently had published, Peace and Goodness, a story centering on the 1862 wreck of the Lord Worsley on the Taranaki Coast during the land wars.

Wendy Barrow’s second hand bookshop, Red Books provided the venue and as friends and strangers gathered, it was a lovely occasion. I was struck by the vibrancy of the conversation, interspersed with the launching speeches, songs and poems. The bookshop, with its discerning selection of books, has a historical resonance, being the same building that Peter Hooper established Walden Books in the 1960s. A good bookshop, like a good theatre, becomes a salon, a gathering place, a place of dialogue, a rare thing these days; and a launching is mana for the writer as it makes personal the exchange of the book (that considered conversation) between writer and reader.

The evening gave me much needed sustenance. At my age, one’s peers are often dying or, like old cars, seriously crapping out. There are the awful degenerative diseases waiting in the wings or entering centre stage, there is the inevitable feeling of growing irrelevancy, of taking up space and of being a burden to children. Thank God for the pension. There is no sight more painful than the old person begging.

Other than cards, one of them hand made by Caroline, I received a bed of nails from Te Whaea (I’d asked for one). Shakti they’re called and after some pain, the experience provides a feeling of levitation.

Sunday, we had a working bee to put a new roof on the museum and I spent the day in the company of Mike, Lance and Tane. This was a complex task usually performed by the suppliers – at a cost we couldn’t afford – but these blokes are highly skilled. There is no greater pleasure than being a labourer for the highly skilled worker. Dave and a visitor mate came over and watched for a time, like kaumatua. Maori, holding the wisdom of the pre-capitalist society, have a place for the old; on the marae telling and retelling the stories. What better task to perform?

After dinner at Te Whaea’s and a touch of the precious piece of pounamu, Te Kura o Waitaiki, gifted by the marae to the women’s group formed around the art of the karanga, I spent the evening reading a New York Times bestseller. The competent writer had spent much time analyzing the market and structures that sell, hot topics etc. The result was banal. Soon there will be computer written books generated by algorithms. Like watching television, they will pass the time, on cruise ships, aeroplanes and in rest homes.

On Friday, after buying a new exercise book in which to keep notes, I had written a new ‘mission statement’: With the climate crisis, the inequality crisis, the cultural crisis and the dominion of corporate power, new structures are required – people to people, co-operative, sustainable. Meanwhile it is essential to speak truth to power, without compromise.

There’s a feeling of autumn in the air; slightly chilly mornings, with the sun taking a little longer to heat the day. The kereru remain, the wild goats are happy, a few more tourists pass through. It looks like a good blackberry season. 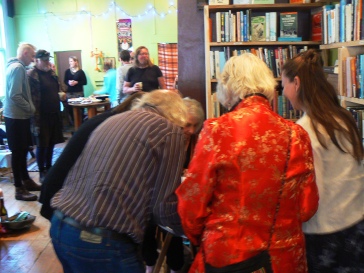