It has been a strange week on the Coast as the possibility of the Council logging in the forests it owns has escalated into a replaying of the Timberland’s fiasco which took place in the 1990s. The same opportunism and muddled thinking has been present with the same tendency to subside into bitter victimhood.

It is timely then to do a quick survey of the economic facts behind the ‘betrayals’ of the Coast working class. Initial Pakeha economic life down here was a mix of opportunism and exploitation. The adventurer gold seeker occasionally made his nest egg but most did not. Settlements came and went but so quickly there was little grief. Meanwhile the service industry of hoteliers, saw millers, food suppliers and transporters did better, with some of them staying on to become local small capitalists. 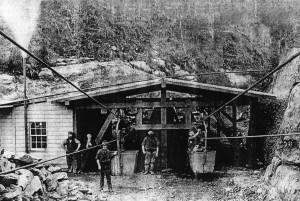 With coal mining a more robust conflict of interest between overseas business interests and local workers gave birth to a union movement. The Great Depression then enabled a combination of destitute workers, farmers and small business people, producing the social democratic welfare state. There followed a period of state ownership of major infrastructure and relative stability – the golden age for the Coast.

But the switch from coal to oil and electricity led to the first round of mine closures in the 1960s and a sense of betrayal as communities struggled to survive.

With Rogernomics, this downsizing continued with layoffs from the remaining state-owned mines, the closure of sewing factories, the disappearance of local potters, plus the downsizing of government departments like the Ministry of Works and Railways and the turning of them into State Owned Enterprises. Once again this put huge pressure on regional communities.

And then in the late 1990s, the stopping of native logging in state owned forests and the rejection of Timberlands’s sustainable beech scheme was seen as yet another betrayal. A  surge in the price of coking coal saw a momentary boom in coal mining before the Global Financial Crisis caused a drop in production in China. As a result Solid Energy collapsed. Further betrayal. Neither Timberlands nor Solid Energy had played a good hand economically or politically.

In the face of these crises, the tendency on the Coast has been to play the role of victim – and often the Greens are focused on as the persecutors. Whereas, in reality, capitalism, with its incessant technological change and its desire for growth as it pursues the single goal of shareholder profits, has caused these betrayals. The Greens have simply pushed for environmental care and sustainability in the face of capitalist-led pillaging of the planet. They can lack understanding and often come from another culture (urban, middle class, educated and privileged), but as conditions worsen with growing income inequality, precarious work and environmental crisis, the oppression begins to be shared. We are all in the same boat, like refugees heading across a dangerous sea to an unknown destination.

This revealing and resolving of contradiction is what is required in an election campaign, rather than branding exercises.

Unfortunately we will be stuck with the latter.